A little over a year after the trip to London which started it all, I embarked on my next adventure: Ireland. For those who don’t know me well or at all, I should let you know I am a bit on the impulsive side. After watching P.S I Love You for the hundredth time, I decided it was finally time to stop wishing I could visit Ireland and actually do it. Although, I  knew I would not find Gerard Butler there (being Scottish in real life despite his film portrayal), the scenery that I had seen in the film was reason enough to hop on a plane.  So with my intense drive to make it happen, I found a friend to join me and my trip was booked for the beginning of September. It was time to visit the place referred to as “The Emerald Isle.”

Now as mentioned, Ireland is referred to as “The Emerald Isle.” However, in order to get this lush greenery it means rain, and lots of it! I am not going to lie and say I embraced this weather with open arms and frolicked in it. In fact, I was ready to hop on a plane back to Canada where the weather was exceptionally good for September.  Despite the temperature reading about 15 degrees,  the winds chilled my bones and the rain whipped my face. I knew that Ireland’s weather was unpredictable and that it could go from torrential downpours to calm skies in minutes, and so I was determined to make the most of my time regardless of what mood the gods were in. After a quick power nap, my friend and I set out to see Dublin.  We were going to embark on our week long tour of Ireland the next day, and so our first stop was to meet some of my tourmates beforehand to get to know one another.  I have to admit during this time in my life I was still quite timid but I was determined to at least push myself out of my comfort zone a little. After figuring out the transit system, we arrived at the meeting point: O’ Connell’s Bar.  It was there I met up with two fellow Canadians, an Australian, an American, and a Dutch girl.  After we all ordered food and drinks, it was here that my trip truly begun. Surrounded by good company,  I felt confident that this trip would be a good one. It was as though I was in one of those overly sentimental Thanksgiving television specials where everyone is smiling and laughing while sharing a meal together at the table. After enjoying our food  and snapping out of my Thanksgiving special moment, it was time to make our way to the Jameson Distillery.  The bar at the front of the distillery is beautiful with its exposed brick and warm lighting. When you walk in, it feels comforting. To the left hand side of the room, there is a chandelier made entirely of Jameson bottles which is reason enough to visit.  For those who have time to do the tour, I urge you to do as I have heard it is quite informative and entertaining.  For my friend and I, it was here we temporarily departed from our new friends to explore Dublin while our tourmates waited for the tour to commence. 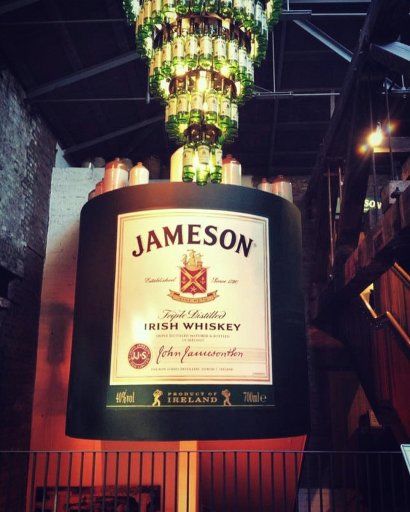 Once we departed our new friends, my friend and I continued to explore the streets of Dublin. We passed by old churches and spent time sitting in courtyards, all the while talking selfies. Despite not having any destination in mind, my friend and I were content just sitting around and people watching. It had been a long day, and it was now time to kick back and relax.

Once our new friends had completed their distillery tour, my friend and I decided it best to head back to our hotel. It had been a long day for us, and if we were going to start a road trip across Ireland the next day we needed to get rested. And so we headed back. For those reading, you may think I could have utilized my day better. However, I couldn’t have planned it better myself. I am a firm believer in that it is not always the destination but the people around you that make your experiences great. By being surrounded by positive vibes, I knew that taking the time to meet these people beforehand was not a waste of time at all. It made me appreciate the space we were in that much more and notice the beauty around me. And so, Day One of my trip was complete. The week that lay ahead would prove to be one of the best weeks of my life.
Stay tuned for my next post where the real fun begins.

The adventures of a sleepy globetrotter. View all posts by Passports and Pyjamas